Century Absinthe 100:
A class of its own 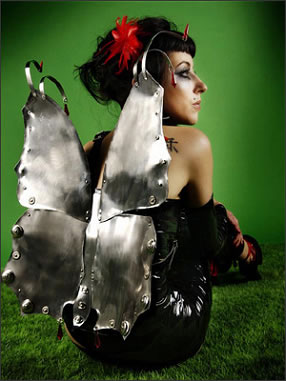 This Green Fairy does have wings, no doubt about it. Most modern-day absinthes pale in comparison.

Century absinthe (or Century Superieure, to use its proper name) is a very unique absinthe – a true artisanal brew made in amazingly small batches only.

It has been available in a handful of selected European stores and bars for some years now and has since attracted something of a cult following. Since last fall, Century is also available directly from the distillery (centuryabsinthe.com). However, each new batch sells out quickly and so waiting lists are not uncommon (check their website for availability).

My first meeting with the Decadent Goddess

I was first introduced to the elusive "Decadent Goddess" (Century's nickname) back in December 2005. I recall the circumstances vividly.

My first bottle of Century was a gift from my dear friend Aaron, a fellow absintheur, who had then returned from a trip to Europe with a suitcase packed full of different "Green Fairies" for a New Year's Eve party. He stopped by one afternoon with a bottle. "What is this?" I asked as soon as I took my first sip. "I would guess some kind of la bleu... but what about the label?" I was puzzled. Underground absinthes don't come labeled. "Well, it is a la bleu, but one you can now buy legally," he grinned.

Century vs. the best of the best

La bleu is a term used to refer to the famed underground range of Swiss absinthes. When absinthe was banned in Switzerland in 1910, most small family distilleries continued to produce their traditional "elixir" regardless, albeit clandestinely. Even after the Swiss ban on absinthe was lifted in 2004, only a few of these small distillers opted to go legal, usually for fear of government interference and taxes.

But because these clandestine absinthes have always been produced for local consumption, they are also very hard to get hold of – unless, of course, you are prepared to actually travel to the area and find a friendly village shopkeeper... who might just pull a bottle from under the counter if you ask nicely.

And some people do go to such length (or rely on "a friend of a friend"), because Swiss and other European clandestines are also considered the best absinthes in the world, far superior to any modern commercial offerings. I was fortunate enough to enjoy a good selection of these during my years in Europe and I can attest the taste—and the effects— are far superior to any other absinthe I have drunk before or since.

I've now drunk Century for over two years and I have no hesitation to say it is an absinthe that belongs to this class. Even though it is now available "over the counter", it is still produced in reassuringly small batches.

"We are never, ever going to go mass-market," explained Century's master distiller in an email. "We don't have the capacity nor the desire to ever take that route. This is our passion, and we want to preserve the true character of absinthe, just like our ancestors did. We will not tamper with the flavour to suit modern tastes, for example, and we will certainly not artificially remove thujone—the natural essential oil of Artemisia absinthium—out of the final product. It's all as Mother Nature intended."

That's a refreshing and welcome attitude in this age of mass-market consumerism. I've had a bottle or two from every single batch of Century produced over the past two and a half years and each was as good as the first one.

Mind you, Century is not the best absinthe I have ever had. That title goes to one nameless clandestine brew I drunk while hiking in the Swiss Alps in the summer of 1998. One evening, my then-boyfriend and I got together with a local couple for an impromptu party under the stars. They brought a couple of bottles of their local stuff, which we drunk louched with the water from a nearby stream, until the morning. The amazing taste—and the experience—will remain in my memory for the rest of my days.

LOOKS AND COLOR— Century comes in an unusual, stylish tall bottle. The contents is a pleasant, natural hue of green, perhaps best compared to the color of quality olive oil.

AROMA— Herbal, pure and clean, like a breath of fresh mountain air on a cool summer's morning. Even before you take your first sip of Century, you are left in no doubt you are about to experience a premium, all-natural product.

The crisp scent of Artemisia absinthium is very detectable (but not overwhelming), backed by a subtle duo of anise and fennel (the "Holy Trinity" herbs). I also detect angelica and a little chamomile.

TASTE— As balanced as its aroma. If you've drunk absinthe before, you might expect an instant wormwood- or anise-sponsored attack on your taste buds. However, you will be "disappointed" in this regard; Century's flavor is far more complex and balanced. In the best of absinthes, no single flavor should dominate, and Century's taste does live up to what its aroma promised: a summer garden on your tongue.

There is this pleasant, subtle wormwood bitterness, a good touch of the refreshing anise and a well-balanced cocktail of supporting herbs. As in the aroma test, I do pick up angelica and chamomile (probably Roman chamomile, once a traditional but now often overlooked ingredient). Not too minty, which is good. Just a hint of that peculiar sweetness at the back of the tongue... I swear that's gotta be calamus (thought to be one of Mother Nature's most potent aphrodisiacs :-) which is another ingredient often overlooked by modern-day absinthe makers.

Overall verdict? This is what true absinthe should be like.

Where to get it

Century absinthe is only available from a handful of European stores or directly from the distillery. Orders can be placed online at the official website:

Delivery time to the United States is usually between three and five days from order placement.

Are you a cult member fan of Century? Or just curious? Regardless, I have a forum topic dedicated to Century absinthe.

Other reviews on the web

I will be updating this section as and when I come across other interesting sites to add to the list. Is there anything I have missed? Did you publish an article or a blog post I should include here? Let me know!