Absinthe is legal in the USA!
Or is it (absinthe)?

By MsJekyll • Posted May 2008
> Discuss this article 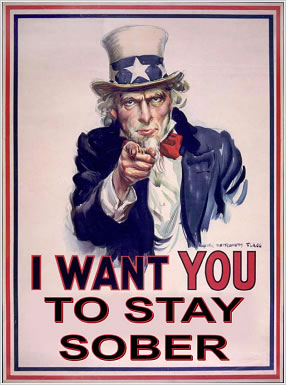 I was very excited when I first heard absinthe was to be legalized in America. But the dream didn't last.

I fell for absinthe way back in the nineties, during a couple of wonderful years I spent over in Europe, and have been used to smuggling my supply into the USA ever since. Well, to say "been smuggling" is an overstatement since the "offence" did not carry any penalty... Though until about ten years ago, it was advisable not to bring any absinthe in its original packaging since confiscation by an overly-diligent dumbass customs official could never be ruled out. Thankfully, those days are gone and nobody bats an eyelid over a bottle (or three) anymore. But last year, things were to get a whole lot better for absinthe-thirsty Americans. Or so I though.

In the fall of 2007, the Lucid guys' trademark slogan exclaimed: "Prohibition is finally over!" I shared their excitement wholeheartedly. I was thrilled, in fact. Absinthe in my local store!

Then I did my homework. And I sobered up.

I don't wish to single out Lucid as there are now other brands of "absinthe" available in America. But Lucid was the first, and it is a very fitting example of just about everything that's wrong with absinthe in the USA.

As per outdated TTB/FDA regulations, all USA-approved absinthe must test thujone-free. For those of you who don't know, thujone to absinthe is what caffeine is to coffee: it's what gives it its "buzz". It's the substance that pretty much defines absinthe as a drink, the substance that sets it apart from any other alcoholic beverage ever made.

The nonsensical FDA regulations present a serious obstacle for any absinthe distiller wishing to enter the American market. The choice: either rape the very soul of the Green Fairy and deliver an absinthe-like abomination, or keep out of the USA.

As a result, the American consumer is left with watered-down off-brands made solely for the USA. Lucid isn't sold in Europe at all (nobody would buy it over there), and the USA version of Kubler is not the same Kubler that's available in Switzerland, to give two examples.

As a result, many European distillers that have been making the real stuff for generations will not make it to America's bars and stores anytime soon.

As a result, don't expect to dance with the Green Fairy.

Absinthe without thujone the buzz

The problem with making thujone-free "absinthe" is that thujone is the natural essential oil of Artemisia absinthium, a wild plant better known as grande wormwood. Of course, wormwood is the primary ingredient in absinthe: absinthe without wormwood is like turkey stuffing without sage. Interestingly, sage contains thujone as well, but is not banned by the FDA.

So why does wormwood get singled out? Because the FDA is a slow-moving bureaucracy and their outdated regulations go back to the absinthe witchhunts of 1912. To put it plainly, it's not about food safety at all, it's about bone-idleness and unwillingness to move with the times. It is highly hypocritical, too, because the word is that—in order to meet the FDA requirements—USA absinthe brands have had to resort to using genetically modified version of Artemisia. Yes, you heard right: genetically modified. Am I to really believe that's safer than a little Mother Nature's buzz? I don't think so.

Absinthe as it once was wasn't

The silly FDA regulations also inspire a climate of confusion and deception regarding what absinthe really is about. Since European distillers of traditional absinthe are unable to export to the States, the American consumer is prevented from having a decent choice of quality products and making his own mind up. Instead, the American market has attracted just a handful of producers vultures who do not hesitate to twist the facts in order to make a quick buck on this side of the Pond.

My dismay at this sad state of affairs has been echoed by countless other absintheurs across America. As soon as the P.R. boys and girls of the new USA legal brands embarked on their mission to persuade consumers that their "absinthes" were for real, blogs and forums began to buzz in response.

In reference to the nonsensical zero-thujone rule, one popular absinthe blogger displayed a speed-limit sign, presumably to imply no fast ride was to be expected with any USA legal Green Fairy. Quite.

In "Absinthe is Back," a Time article published in November 2007, one academic said of the new brands: "They are playing pretend. It is nothing like the old stuff."

The authoritative Erowid guide also published their view of absinthe in the USA, concluding: "Breaux [Lucid's distiller] argues that high-thujone absinthes are inauthentic ... But of course his controversial claims, which contradict 150 years of scholarship, provide direct benefit to vendors who are at pains to persuade consumers that 'thujone free' absinthe is the genuine article."

Discuss » Absinthe in the USA

I've been flooded with emails ever since I published this article. I have now created a forum topic for the discussion of made-for-the-USA absinthe brands.